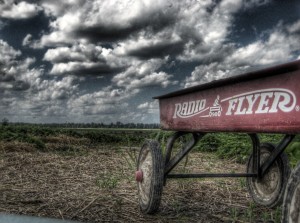 Daddy said Ma Welp got her teeth from a Sears catalog. We believed him. If you could see those teeth, you’d believe him, too.

Ma was a thick bodied woman with a tight grey bun and sensible shoes. She was the babysitter when our grandmother, “Mom,” wasn’t available.

When Mom came over, once the parents were gone, she would say, “You kids go to bed now.” Then she’d settle herself down in front of Gunsmoke and fall asleep.

Ma Welp never slept. And pretty much never smiled; on the rare occasion when she did the gums on those teeth shined like new Silly Putty.

I don’t remember Ma being mean to us, but I do remember my brother and I did our best to stay out of her way. The woman was square shouldered; she could fill a doorway. She was backlit.

Ma’s daughter Tootie and our mother were best friends. Tootie was a professional golfer and had curly red hair. She was long and slim with freckles across her nose.

Tootie was always laughing. As a kid I was puzzled about how big, solid Ma Welp could be the mother of lythe, bubbly Tootie. I guess Ma’s no-nonsense way is why our parents considered her the best “number 2” on the short list of sitters.

Late one afternoon my brother and I decided to make a racecar, which we did fairly often. We walked down to Brinlee’s grocery store on the corner, and hauled back a cardboard shipping box from Rainbow Bread. The box fit snugly in our Radio Flyer. We wedged it in, and gathered our tools: an old paring knife, and crayons.

We’d done a pretty good job of carving out the opening for the driver when we heard Dad through the kitchen window.

“Okay, Ma, I’ll be by to pick you up in about twenty minutes.” We stared at each other. Awe, dammit. Ma Welp? Tonight?

“We haven’t done the doors, or the lights. We’ll never get it done in time!”

“Well, we could just cut the doors,” he said, and began feverishly sawing on the cardboard.

“NO!” I hissed. “You can’t open the doors without handles and we have to put lights on it.”

“If we just cut the doors …” he had sawed about halfway through on his side. “Then we could take it to the top of the hill and ONE person could get a ride.”
I stopped drawing the headlamp and glared at him. I knew exactly where this was going.

“And who is the ONE that will ride?”

He finished cutting the door, then stood there, plucking cardboard shreds from the knife.

“Hmmm … weeell,” he said slowly as he tested his door. He threw me a sideways glance. “Y’know, racecar drivers ARE boys, so …”

“YOU are stupid!! That’s a stupid answer. And you smell like Cheerios and baloney. Racecar drivers do NOT smell like that.” I threw down my crayon. “I’m not doing this anymore.”

He put down the knife and, without looking at me, picked up the tongue of the wagon.

When he got to our driveway, he steered it right, and up the incline. I saw daddy coming down the street with Ma in the car, so I got behind the wagon and started pushing him up the driveway and through the gate. The wagon came to a stop back where our race car building began. He climbed out and looked at me, smiling.

“That was a great ride!” I glared at him.

“Shut up. Daddy’s back with Ma.” His face went pie eyed.

“Uh oh. We better chop chop.” We gathered our crayons, our little knife, and slipped inside. One thing we were good at doing together was making ourselves scarce. And we did that more often that we made race cars. I guess you could say we were pros at it.

This entry was posted in Uncategorized.