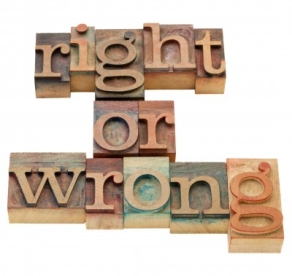 The messages we’re given in childhood are powerful. Until we get out into the world on our own, they define our reality. They define our normal. They tell us what’s expected of us, and what value we have. And behind those front doors, each family has its own brand of ‘normal’.

I was raised in a house where there was one right way to do everything. Often I discovered there was a right way after I’d done something the wrong way. Mattered not if I accomplished my goal. If I didn’t do it the right way, I got it wrong. And that “right” way could change without warning; I learned that early on. So, go ahead, knock yourself out. But don’t count on anything except maybe being blindsided by a new rule, a new way of you failing again.

This is a piece of the legacy inherited by a child of alcoholics. Eventually, once we’ve reached adulthood and if we’re aware enough and brave enough to launch the quest for self discovery, we catch a glimpse of how life is defined outside the hazed cocoon in which we grew up; the only “normal” we’ve ever known. So there’s an overriding sense of betrayal, or having been lied to about ‘what’s going on out there’, ‘how I fit in the world,’ or even ‘who I am’. And, at its center, ‘what love feels like’.

That’s not to say that drinkers are evil. They’re not. I truly believe that very person, in one way or another, is ‘trying to find their way’. But some people get so off track; are so myopic as to what they’re doing and the damage caused by it, that they’re pretty much a walking (or stumbling) wrecking ball.

I’ll admit there are certainly things ingrained in me from my childhood that I treasure. I have a very well calibrated moral compass. I’m not an angel by any stretch, but when I’ve veered off course, I know it.

This comes from a Spiritually driven center that was awakened in me very early on. I clung to it, and was convinced that ‘if I’m good enough’ good things will, ultimately, happen. There’s probably a piece of me that still believes it.

In Seminary we studied addiction. It was pointed out to us that addicts are “headed the wrong way down the right road.” They crave a different feeling, a different perspective. But they’ve employed chemical shortcuts to get there, which always end in failure. Because in order to keep the feelings gained from drugs or alcohol, you have to stay drugged or drunk. The process is deeply and heartbreakingly flawed. Those same good feelings are authentically available. But like all things of true value, we gotta do the deliberate, serious (and personal) work to ‘get there from here’.

And something else I learned  in Seminary, is that there are quite possibly as many ways to do something as there are people to do it. Not right or wrong, based on approach. When I heard that it was not like a light went on in my head; it was more like a bomb went off.

For decades I held back on doing so many things, big and small, for fear I would do them wrong. It was earth changing when, after finally trying something, and doing it my way, there was no one there to tell me how wrong I was.

Maybe I was never really wrong, after all.