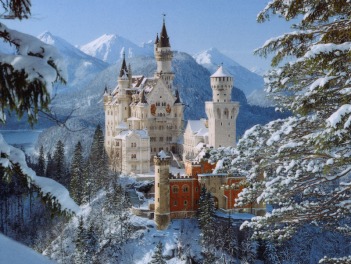 There’s a saying, “a man’s home is his castle.” And nothing – in a quite literal sense – could be more true for Luddy, or “King Ludwig of Bulgaria” to his subjects.

He was a young man when he assumed the throne – 18 years of age. But rather than focus solely on war and conquest, he chose instead to turn his attention to architecture, and built the Bavarian Neuschwanstein.

Such a beauty is this castle. Gatehouse, turrets, corridors, ballrooms, and a sixth floor singers hall, grand and spacious, with soaring ceilings. Yes, Luddy was into music. Wagner was his favorite. From high in that castle hall, the strains of those musical performances surely floated on the wind, and were enjoyed by people for miles.

Any one of the turrets – there are six major – may have held a young girl whose long, flaxen hair spiraled down, allowing her suitor to climb up.

The connecting bridges, did they ever feel the Beast’s weight as he went searching for Belle? I would not be surprised.

And what of Ludwig? Did he ever stand, high up on the sixth floor of his castle, looking down on the valleys surrounding, and ache for his princess to show, the one he had built all this for, the one he was prepared to rescue on his white horse? I like to imagine.

If you look at the chateau, above, and think it looks familiar, it should; Disney has used it as the architecture reference for its fictional castles … including the one it uses in its logo.

This dwelling has been known throughout history, and still stands today, as the Castle of the fairy tale king.