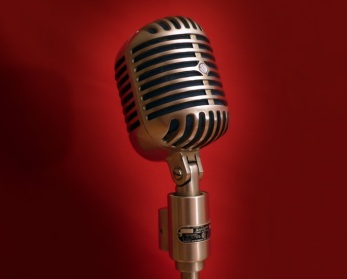 When I was five or six I was drawn to the microphone at the Knights of Columbus spaghetti dinners. My Uncle John would step up on that stage and use it when he introduced Monsignor Fletcher to say the blessing. And when he announced the three piece band, made up of parishioners. Ladies with blue hair played the stand up bass, the accordion, and the saxophone. Their pearls and ear bobs swayed or bounced to the rhythms while the grownups danced.

But it was when they took their break, and the microphone stood up there all alone that I felt the pull. I wandered up. I sat on that stage, just a low riser from the floor. I pivoted and suddenly, I was there. I wandered over. I looked out at the people seated at long tables, talking and laughing. The microphone was about a head and a half taller than I was. No way could I reach it. So I stood.

Years later I would actually use microphones, in the studio and on stage. For years I worked in an industry where people think if you haven’t “sold” a song or gotten famous, you’re just a wannabe who didn’t quite have the stuff.

But the truth is, the fame part was never an issue. Never a goal. It was always about the music. And music is its own thing. Fame is about politics, and strategy, and not just a little bit about the dark side of our nature. There are those who squeak through to the main keylight unscathed, but it’s not a huge percentage.

Looking back on my years in the “microphone” business, I know that every prayer I ever prayed about it was answered. But the picture looked quite different than I had imagined. The clarity I have, and the perspective given by years of experience, make me grateful for being blessed to do what I’ve done, and am doing, without ever having sold or being driven by anything but the music.